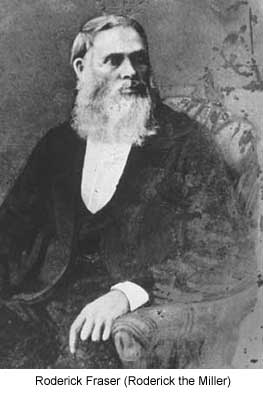 In the 1850s a remarkable band of settlers arrived in New Zealand. Their migration had begun in the Highlands of northern Scotland and the Hebrides Islands more than 30 years before, at the time of the “Highland Clearances”. Large farms and small crofts alike were abandoned, to be replaced by sheep farms and deer runs, and the evicted residents sought new lives overseas.

One group of migrants, led by their strong-minded minister Norman McLeod, sailed to Cape Breton in Nova Scotia, Canada. As the years went by they were joined by others from the Highlands, until the Rev. McLeod’s flock numbered almost a thousand. For 30 years this close-knit, Gaelic-speaking, hardworking and God-fearing community toiled to make their way in what was then a wilderness. The hard winters, however, and several crop failures and other difficulties were a trial, and about 1850 a glowing report of Australia and concern for the prospects of their descendants set them planning another migration.

From 1851 to 1859, they undertook the lengthy voyage in ships mostly built, provisioned and crewed by themselves, still led by the indomitable McLeod (by then aged 71). On arrival in Australia they decided their prospects of settling as a community were better in New Zealand, and from 1853 they began to settle in the Waipu district south of Whangarei in northern New Zealand. There they rebuilt their community, self-sufficient and isolated. There were then no roads, or even bullock-tracks; the only way in or out was by sea or on horseback.

Among the passengers on Breadalbane which arrived in December 1858 was Roderick Fraser, who had been a child at the time of the initial voyage to Nova Scotia. Like the other settlers, he was well equipped with practical skills, and it seems that he had had a mill in Nova Scotia. With the help of the community he soon built the first mill in Waipu, to the great joy of the women whose task it had been to grind all their flour by hand. Thereafter he was commonly known as “Roderick the Miller”.

Several sources record that he was also a maker of furniture and spinning wheels. Spinning and knitting were important domestic arts in Waipu, though the weaving which had produced much adult clothing in Scotland had now been abandoned in favour of ready-made clothes. Socks and stockings, however, were knitted from handspun yarn, either a blend of white and natural black wool or dyed with local lichens. “At one time there was a great demand for Waipu socks at 3s 6d a pair” (N.R. McKenzie The Gael Fares Forth p.108).

No doubt some of Roderick Fraser’s wheels feature in the photograph above, of a “spinning frolic” at Waipu. “Regularly the women would collect their spinning wheels, made by Fraser the miller, and converge on someone’s house for a “frolic”. The whole day was occupied carding and spinning wool” (Neil Robinson Lion of Scotland p.52). “Frolic” seems to have been a general word for any occasion when members of the community gathered to share a task: harvesting frolics are also mentioned.

The Waipu Museum has three spinning wheels, none complete, as well as some other interesting spinning artifacts. Two of the wheels are made from oak and European beech. They were no doubt brought from Nova Scotia, and probably before that from Scotland. One is shown at left and right. The flyer does not belong to this wheel but fits it well enough. A second wheel is similar though not exactly the same. Its treadle is worn down with long use.

The cord between its maiden tips is a leather thong (not unexpected as there were skilled tanners among the Waipu settlers). This cord would have been to attach a brake for scotch tension, but perhaps the original use of all these wheels was double drive, as they have two clear grooves round the rim of the wheel for the two loops of a double drive band.

The third wheel (below) is in poorer condition, but most parts survive. The two remaining legs appear to be later replacements. The table has been identified as puriri and the wheel and treadle bar as rewarewa – two timbers native to New Zealand. It is a fair assumption that this wheel is the work of Roderick the Miller.

All three wheels follow the same traditional design, though there are minor differences such as the number of spokes (Roderick’s wheel has 11; the others have 13 and 14 respectively, unevenly spaced). The turning of each is a little different in places. The two Scottish wheels have the axle bearings reinforced with little pieces of (presumably hard) wood, while Roderick’s wheel has bearings of bone (pictured at right).

There is also a Lazy Kate of attractive design which has been made from a curved puriri branch: probably more of Roderick the Miller’s work. There may well have been other makers of spinning wheels in 19th century New Zealand, but they remain (so far) nameless and unknown.

(I am very grateful to Waipu Museum, particularly Patsy Montgomery, for invaluable help and for the use of the early photographs.)