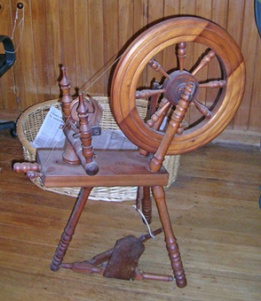 John Rappard came from Holland in 1952, and Maria (also known as Mies or Mitzi) followed in 1956. Before their marriage they built their home on the outskirts of Dunedin, Maria clearing acres of scrub by hand while John was working in forestry. There they developed a poultry (egg) farm. Maria had attended Art School in Holland, and she took courses at Technical College in Commercial Art and Pottery. One of her teachers gave her an old World War 2 wheel (a Schofield) and soon she began demonstrating and giving spinning lessons.

One of her students had an antique wheel, too feeble to spin on, and Maria persuaded John (a keen woodworker) to duplicate it. The picture above shows this very first Rappard wheel. Some time later he made two wheels for an art shop in Dunedin, and a year or so after that some were made for another shop and for export.

In 1970 the Rappards embarked on a fulltime spinning wheel manufacturing enterprise. The hen houses became the factory workshops. Soon the company had agents overseas, and by the 1980s 85-90 percent of their production was exported, to Australia, Europe and the UK, Japan and North America. In the late 1970s, the factory employed up to 15-20 people, though quite a few of these were part-time. Practically all Rappard wheels were made from Southern Beech, nothofagus menziesii, a lightweight but strong and easily worked New Zealand wood.

The first wheels were the saxony-style Northern European, of which two versions are found. This has a most unusual construction of the rim of the drive wheel, which as far as I know is only otherwise seen in Sutherland and a few Thompson wheels and some late Pipys by Ray Chisholm. (Only the rim is shown at left – the hub and spokes were assembled first and the rim pieces then fitted.) The Northern European and the later Mitzi have a motif on the treadle, which varies from wheel to wheel. These were drawn by Maria and executed with a router. There is a study of them here.

The design of the popular Little Peggy and Wee Peggy upright wheels evolved from the Shetland wheels which many early settlers brought to New Zealand. The Little Peggy was sold assembled and polished, but the Wee Peggy was a kitset which made it particularly suitable for export. Their name was inspired by Peggy Linn, a friend and spinning pupil of Maria’s. Many Peggies are still in use.

In addition one double flyer Wee Peggy was made, which was featured on the cover of The Web of August 1977 (shown at right, with permission).

In a price list of February 1977, the Northern European wheel is listed at NZ$150 and the Little and Wee Peggies at NZ$88 and NZ$63 respectively. There are also spinning and rocking chairs, other spinning accessories and a range of “Raplin” toys. The norwegian-style Mitzi does not appear in price lists till after 1981, by which time the Northern European no longer appears. By 1986 the “Tote-a-Loom” tapestry loom is included.

A bobbin-lead bulky/plying attachment (pictured at left) was available for the Wee Peggy, and probably for other models too. The flyer is 18cm (7 inches) wide, and a big front maiden is also included. A diagram showing how it is attached and set up can be found here. The large whorl in the photograph at left is another extra, not part of the bulky attachment.

In all Rappards made some 20,000 spinning wheels. When the factory ceased production, the brand was acquired by Ashford, who made one batch of Wee Peggies and Mitzis in 1997. More recently Ashford have supplied their version of the Wee Peggy to some retailers in other countries – they have not been sold in New Zealand.

In the photographs at right, the Rappard is on the left and the Ashford on the right. There are some very clear differences between the two versions: perhaps the most obvious is that the Rappard has 6 spokes, the Ashford 8. The Ashford rim has 4 sections (felloes) not 6. The flyer is like that of the Ashford Elizabeth and the whorl is pressure-fit not screwed on. Likewise the front maiden is not screwed in – the knob at the front of the mother-of-all clamps it in place, making it simple to level the flyer when the drive band tension screw is tightened or loosened. This screw is metal, not wood

The Ashford Wee Peggy does not have an Ashford label, which can be confusing: the words Wee Peggy and a silhouette of a sheep and lamb are carved on the treadle. The treadle itself is considerably more substantial than Rappard’s. In general the Ashford is heavier and chunkier than the original. Woodturning on the original is better quality.

The assembly instructions and parts list for the Rappard Wee Peggy, Mitzi and Jumbo attachment can be downloaded here; original parts are no longer available.
Assembly instructions for Ashford versions of Mitzi and Wee Peggy are in the Ashford Past Products list, here. In general, parts are not interchangeable between the Rappard and Ashford wheels, though it can sometimes be worth trying an Ashford double drive flyer on a Rappard model (no guarantees!).

For more on the earliest Rappard wheels, see https://nzspinningwheels.wordpress.com/2019/07/18/more-intriguing-rappard-wheels/

The photographic study of changes to the Rappard Peggy wheels has moved. It’s now here: https://nzspinningwheels.wordpress.com/rappard-peggy-timeline/.

I thank Maria Rappard, Betty Kelly, Hamish Campbell and Ged Maybury for telling me about Rappard and Rappard wheels.