There is a timeline of Peacock wheels in progress at a different site. The account below may need revision; meanwhile the timeline should be read in conjunction with this. 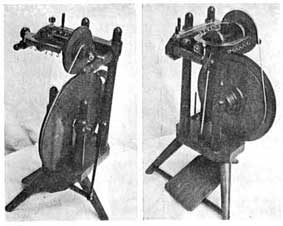 In an article in The Web of August 1976, Beulah Peacock describes how she and her husband travelled in the South Island for nine weeks: he played bowls at their various stops and she was able to spin with spinners and groups contacted along the way, thanks to the extremely portable wheel he had made her. It came apart and could be packed into a suitcase for travelling.

The photograph at right of Peacock “No.1” is from The Web (with permission).

E.L. (Les) Peacock then developed an even smaller and lighter wheel, which became the popular Peacock. It was sold from the Peacocks’ home in Paremata, north of Wellington. It has only one post and the drive wheel is only 9 inches in diameter, weighted with lead for balance.

Beulah writes “My husband’s wide knowledge of engineering has enabled him to teach me the mechanics of the spinning wheel and this is quite necessary to improve the quality of spun yarn.”

By 1980 the Peacock business was taken over by Mr Karl Fomotor, of Wainuiomata near the Hutt Valley. He made several changes to the design, including a smaller drive wheel. He also developed a simpler but quite similar wheel called the Tui, and a handy little electric wheel (left). In partnership with a Mr Simon he set up a company and commissioned a furniture company to do the manufacturing, probably the Atlas Furniture Company in Burnside, Dunedin. Eventually the business grew far too large to manage in his spare time and he retired from it. 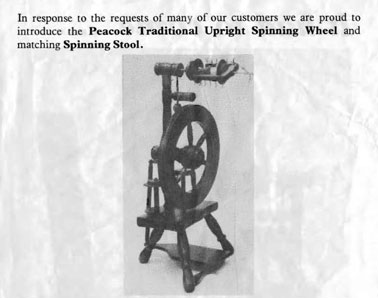 Mr Simon kept it up for a time, during which he introduced an altered design called Peacock Traditional. The similarity of the lower parts of this wheel to the Crofter suggest that he may have obtained some components from Sharp and Page, also of Auckland, who were making these.

Soon the company was sold to Ashford. Ashford made some Peacock wheels from 1986 to 1991, after which they were discontinued.

In the 1980s Mr Peacock made some wheels of an altered design, which he called Beulah after his wife (since he no longer had rights to the “Peacock” name for his wheels).

All Peacock wheels are small, compact uprights made of rimu, an attractive New Zealand native timber.