H.H. Napier had no training in carpentry, but in 1965 he began a wood-turning business called Glenfield Industries in Takapuna on Auckland’s North Shore. Two years later he said he had made more than 400 wheels and was beginning to export them to the United States. His upright wheel cost 27 pounds 10 shillings, and a saxony style was two pounds cheaper. He never learned to spin: he said that by the time he got home at night, he was usually sick of the sight of spinning wheels.

In a trade directory dated 1968-69 he advertised Glenfield Industries as “Manufacturers of looms, upright spinning wheels, potters wheels and quality turnings. The most modern antiques available.” Had he perhaps stopped making the saxony style by then, finding it less popular and harder to export? His business may have closed by 1970 as there are no entries for Glenfield Industries in directories after 1969. 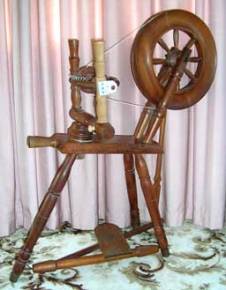 The identification of wheels as being by Napier is based almost entirely on a photograph and its accompanying article which appeared in the New Zealand Herald on July 22 1967. The profile of the drive wheel is particularly distinctive.

No wheels bearing Napier’s name are known. However, the one pictured above (which has the crude replacement front maiden) bears the remains of a gummed paper label which reads ‘Airest “Mayflower” Colonial Selection’. It is securely dated to 1971 or most likely earlier. Another wheel bears the two labels shown above.

Airest Industries Ltd ‘Manufacturers of “Mayflower” Colonial Furniture’ (and several other lines) appear in Auckland directories from 1962 to at least 1977. Was Airest marketing Mr Napier’s wheels among their other products? Was he making them under contract to Airest?