If you can help with any of these unknowns, please get in touch!

Click on a little photograph to see it full size

Wee Geordie is the name of this wheel, made presumably in March 1988, but we have no idea who made it. It was probably his 5th wheel. It was found in Havelock North, and looks to be made from rimu.

It’s a double drive wheel, but the piece on the floor in front of it in the first picture may be a scotch tension attachment. It seems likely that the wooden knob on the end of a rod below the flyer can be screwed to adjust the height of the flyer, and thereby the drive band tension, much like Philip Poore’s Wendy wheels.

This unusual wheel was left behind when a house in Motueka was sold. It spins well. The tension is adjusted by the nut on the horizontal metal rod that runs between the upright that supports the mother-of-all, and the other little upright beside it. This tilts the mother-of-all support, altering the distance between it and the drive wheel and thus altering the tension of the double drive band. (A similar system is found on some antique “great wheels” from Europe and North America.) Ballbearings smooth the joint between the footman and the crank, and the connection between the footman and the treadle is an adjustable ball and socket joint.

This little upright wheel was bought in poor condition from a junk shop in Te Puke in 1972. The spindle and flyer sit on top of the maidens.

This upright wheel looks as though it may owe something to Nagy wheels, though there are a number of differences. It has an unusual marking of three fish, and was apparently made in April 1972.

Jack Ruysch of Taupo made these spinning wheels as well as many other wooden objects. This newspaper photograph was published in 1968. Mr Ruysch, who died in 1999, came from an artistic Dutch family of long standing, and his wife Cornelia was a spinner and weaver. She said he made perhaps 20 of these wheels, which were sold in art shops throughout New Zealand as well as in Taupo in the 1960s and 70s. They were made of rimu and had a paper label bearing the trade name “The Chisel”.
Does anyone still have one of these unusual-looking wheels?

This old wheel is currently in The Wool Shed Museum in Masterton. The original owner was said to have used it to spin so she could knit for the troops in World War 2. Another, also in the Wairarapa, was described in a newspaper clipping as “locally made” and used to spin wool and make jumpers for soldiers and sailors.

They have a most unusual spindle and tension system. The spindle is separate from the orifice and the bobbin is removed through the gap. Bobbin tension is adjusted by turning a metal screw which tightens or loosens a spring pressing on the bobbin. 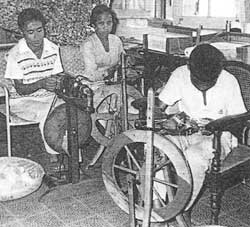 One of these also features in a picture taken in Indonesia in 1966, during a visit by Mrs Kathleen O’Reilly to teach spinning and weaving. The description in the Eastbourne Spinners’ file says
“The Little Wheel, with Mira (in Indonesian wool sweater)
The McDonald wheel with Matara spinning.
Atus is at a similar wheel to Mr McDonald’s” [a Schofield].
The one like our mystery is on the left, and named the Little Wheel. These are heavy and by no means small … could the maker have been a Mr Little?

This large saxony wheel is said to have been made in the Cheviot area of North Canterbury, out of a kauri church pew. Unusually, it has an uneven number (7) of spokes, though there are 8 felloes (the sections of the wheel rim). It has no markings.

This norwegian-style or double table wheel was apparently made by an elderly man for his wife around 1990, possibly in North Canterbury. The spokes are pegged in with wooden pegs. Its only mark is IX – could this mean it was the 9th he made?

This saxony style wheel possibly originated in Whakatane. It is made of oak. The flyer is hand-forged iron, and the scotch tension brake runs from a peg on the wooden bar above the flyer down to a peg on the base of the mother-of-all.

This small double table wheel was seen in the Central Hawkes Bay Settlers’ Museum at Waipawa, and they would love to know about its origin. The flyer hooks are made of small bent nails.

This upright wheel was bought as a box of parts at a church fair, where it was being sold as firewood! The owner has put a lot of work into repairing and reassembling it and would very much like to know more about it. There is a brass band around the wheel with grooves at each side.

This mystery wheel spins very well. Like the Callister it appears to be based on the Peacock wheels but there are many differences.

This sturdy little wheel has a lever and an idler pulley to tension the drive band, somewhat like the Mathieson, but there are few other resemblances.

This unusual looking wheel has no known history. It is made of oiled kauri and very heavy. The bobbins are very large but the orifice is small.

This small wheel was bought at a school fair at Swannanoa, north of Christchurch, and may have been locally made. It is mostly kauri. The spindle whorl is attached to the the flyer shaft with a screw, and a screwdriver is supplied!