Kenneth Bartlett worked professionally as a restorer of antiques. He was attracted to an imported double table Scandinavian spinning wheel he saw being used in a Christchurch craft shop in 1963. His first wheel was modelled on that one. The picture at right shows (back) a wheel bought from Husfliden, Bergen, Norway in the early 1960s, and (front) a Bartlett wheel dated November 1972.

He was then asked by Ida Lough, a noted tapestry weaver, to make some more wheels as there were so few New Zealand makers at that time (Ashfords did not resume spinning wheel production until 1965). Ken’s first wheels were exact copies of the imported wheels. Over the years he made changes so that his wheels became more robust and suited to New Zealand spinners’ requirements. The two pictures at left are (top) a wheel he signed in 1970, and (bottom) a later one showing sturdier construction and a larger treadle.

In total he estimates he would have made well over 100 wheels between 1963 and about 1989 when he retired. He would make the parts for 12 to 20 wheels at a time and assemble them. He tried to keep to the timber types used in the Scandinavian wheels (pine and birch) and felt that the equivalent timbers available in New Zealand would be imported douglas fir (oregon) and New Zealand silver beech. By the early 1970s he was using exclusively these timbers. 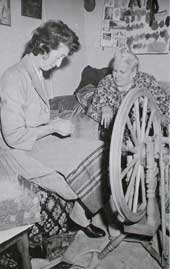 In 1967 he was asked to make a wheel for presentation to the Governor General’s wife, Lady Fergusson, when she opened the new facility at Lincoln for the Wool Research of New Zealand organization. For this one (and a second like it for his wife Mary) he decided to use all New Zealand native timbers, substituting kauri for the usual oregon. The photograph at left shows Lady Fergusson receiving a spinning lesson on her new wheel from Miss Aileen Stace of Eastbourne..

Another departure from his custom came in 1973 when he was asked to make a wheel in oak. He made three of these in all.

Most of the Bartlett wheels were sold directly through personal orders and there were frequently waiting lists. Ken received 25 pounds for the first wheel he sold through Several Arts in 1963. He had various workshops around Christchurch: at one time he was based in the area where the Christchurch Town Hall now stands. He moved from there to Strickland Street and finally to Riccarton Road.

From the early 1970s he also made looms, and these became a larger part of his business than spinning wheels. He tried to spend equal parts of the year on antique restoration, spinning wheel construction and loom making. (I am grateful to Lyndsay Fenwick for compiling this account, with the help of Mr & Mrs Bartlett.)

The original information that would have come with a Bartlett wheel can be downloaded here.