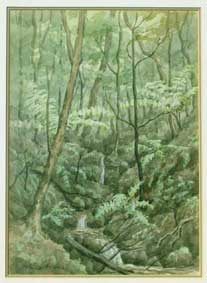 John Lysaght Moore (1897 – 1965) was an artist and printmaker who was part of the close-knit community of York Bay, near Eastbourne, across the harbour from Wellington. He was born and spent his childhood in Taranaki, later moving with his mother to Havelock North in Hawkes Bay. In the 1920s he studied art at Goldsmith’s College, London. In 1937 he bought a house in York Bay but did not move from Havelock North to live there until 1947.

He spun and wove, and experimented with natural dyeing. A recollection that probably refers to the late 1940s or 1950s mentions “John Moore quietly busy with his woodcuts, spinning and painting.”

His watercolour above is believed to have been painted among the native forest on the hills above York Bay.

During World War 2 over 400 of his saxony-style wheels were made, and were sold all over New Zealand. They are notable for having their flyer assembly on the right. A number of the larger Karure wheels are known to have been used by the Eastbourne spinners in Miss Stace’s studio. John Moore’s own notes say it was “More silent, suitable for use in sitting room with others in the room. Recommended for those who mean to do a good deal of work.” The original price was 4 pounds 10 shillings. Later, E.R. Cole produced a very similar wheel to the Karure. 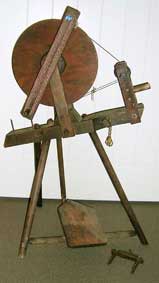 The smaller Miro was made for economical wartime spinning. It only cost three pounds, and John Moore’s notes say it was “Not quite so silent (as the Karure). Good for schools, or for those who have less time to spin.” The Miro was supplied with a detachable skeiner, and there was an optional one available with the Karure for three shillings. The Miro at left is set up with its skeiner (though the top peg is missing and a clothespeg has been used instead). The flyer has to be removed to enable the skeiner to turn. The extra peg near the bottom of the wheel post looks like a yarn guide for when plying from the built-in bobbin holders but if it is used this way, the yarn winds around the axle so its purpose is still uncertain.

The Māori names are interesting: Kārure means twist, spin or to twist two pieces into a cord. Miro means to make a thread or just the name for a thread.

In 1944 an article headed “Artist’s War-task” in the New Zealand Free Lance (October 18) said “…he has set the wheels of home-industry going by making hundreds of spinning wheels of practical design… Though Mr Moore made the first wheels alone, the industry became so overwhelming that latterly outside help has been given by practical men.”

Those “practical men” were A. Toop and Son of Havelock North, whose label is on at least one of the Karure and one of the Miro wheels. They were important builders in the 30s and 40s in Havelock North, with their own factory and joinery. During the 1939-1945 war the making of spinning wheels was a “stop-gap” when their other business was slow. It is not clear exactly when they began to build John Moore’s wheels: a letter from Perrine Moncrieff to him dated August 15 1942 mentions him “making” his wheels and also implies that he tested them before they were despatched. One Miro wheel still has a paper label that says it was “designed and tested by John L Moore, Havelock North”.

The original information that would have come with a Karure or Miro wheel can be downloaded here.