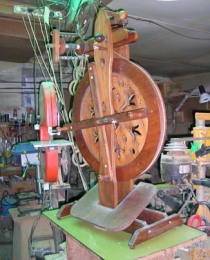 Mike Keeves writes “In 1976 when Maggie was expecting our first born she learned to spin in order to make a cot blanket. I learned too.” On a borrowed wheel he discovered the difficulties of tension, warped wheels, stiff mechanism and other imperfections. Having served an apprenticeship as a joiner in England, worked in Sweden as a pattern maker and in Germany in building and engineering, he thought he should be able to make a wheel for them to use. The one at right was his prototype.

After many hours of trial and error he got the mechanical and aesthetic aspects as he wanted. The drive wheel was made of marine grade plywood which holds its shape, and the heart-shaped cutouts near the centre of the wheel are to remove excess weight: the heart motif is a European folk art influence.

He had not intended to make wheels commercially, but spinners wanted them. “One person remarked that it was a graceful looking wheel, and as Grace was my mother’s name it seemed a good choice” he remembers “so it became the Grace wheel.”

The Little Grace was developed from 1978 onwards in response to a demand for portable wheels. As spinners were then wanting to do a greater range of work he increased the original two ratios to four, and strengthened the wheel to take the strain developed by the greater pressure that this required. Bobbin storage on the wheel was also increased from two to four. From 1984 the Little Grace Special evolved, with five and then six ratios and carrying six bobbins. This has proved the most popular design.

As the wheels became more complex they became more time-consuming to make and more expensive, so simpler models were developed from 1992: the Grace Imp and the Gypsy Grace.

The Gypsy Grace Rover was very special and only six exist. It has similar capabilities to the Little Grace Special, and it packs down into its own carry case  (right) which doubles as a seat. The picture at left shows Maggie Keeves spinning on a Gypsy Grace Rover, seated on its convenient case.

The Grace, Little Grace and Little Grace Special all have a brass plate bearing the wheel number and the owner’s name.

The Grace is too large to export but the others have been sent to Australia, Europe, the US and Japan. Of the more than 850 wheels made, about 30 per cent have been exported.

Grace wheels very rarely appear on the second hand market. There is today at least a six month waiting list for the Little Grace Special, which Mike Keeves still makes a few of in his workshop at Wakefield near Nelson, New Zealand. He can be contacted by email.

The manual for the Little Grace Special can be downloaded at https://nzspinningwheels.wordpress.com/some-spinning-wheel-leaflets/.