Spinning was a tradition in the Beauchamp family – Heather Nicholson describes the enterprise set up by Commander R.R. Beauchamp during the 1930s depression, which provided employment spinning wool and weaving tweeds. (The Loving Stitch pp. 110-111)

In the early 1960s his son John, at that time a Lieutenant in the Royal NZ Navy, was transferred with his young family from Auckland to Wellington. They found the climate colder and knitting wool expensive, so John took up spinning and began to make spinning wheels. Like many wheel makers in and around Wellington, he benefited from the advice and constructive criticism of Aileen Stace in Eastbourne.

This group of John Beauchamp’s early wheels, some not yet completed, shows that they were for the most part functional and unadorned, using various sizes of dowels and knobs from hardware stores.

Word about his wheels spread among spinners and he made many sales, with the little uprights the most popular as they were easy to take to meetings. There were also norwegian-style wheels and saxonies like some in the photo above.

When he was transferred back to Auckland and to sea in 1967, Istvan Nagy took over his Wellington business. However, John took a lathe to sea when on the navy tanker Endeavour, and made wheels at that time for recreation as well as filling occasional orders. He left the navy in 1974 and in 1978 he moved to Christchurch. There he made a couple of small runs of wheels, the last 10 in 1981. 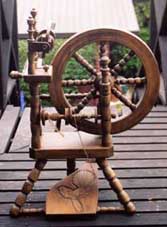 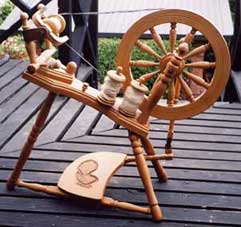 His later wheels are more elaborately turned. These two have carvings on the treadles of fantails (a favourite New Zealand native bird) by his father, Commander R.R. Beauchamp.

He estimated he made some 200 wheels over the last 40 years. Before his death in early 2019, he was always  interested to hear news of any of his wheels, and happy to do repairs if necessary.