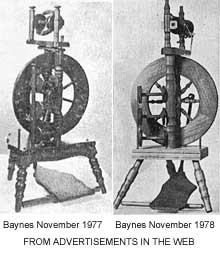 Ian Baynes started work in 1963 at the age of 16 as an apprentice cabinetmaker for Ashford Handicrafts Ltd. Initially he was making their kitset furniture. Ashford had ceased producing their spinning wheels after World War 2, but in 1965 they received an order for 20 wheels. No patterns and jigs for the earlier wheels had been kept so Ian and another employee made these. Production then started on the Ashford Traditional.

By 1970 Ian Baynes decided to go into business on his own as a furniture maker and picture framer. In 1973 he was approached by local spinners who wanted a smaller, upright wheel which could be transported more easily than the Ashford Traditional. Ashford were not interested at that time in making such a wheel. The ladies were persistent, so Ian designed his Colonial Upright Mark 1 and initially made about 250 using his furniture-making machines. It was first advertised in The Web in November 1977 and was in great demand. 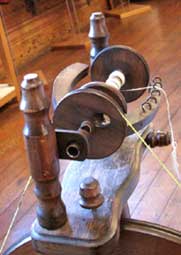 Before long the Colonial Upright Mark 2 was created (it was advertised in 1978) using machines specially developed for wheel-making. Soon numbers were being exported to Australia and around the world to spinning groups. It has been largely unchanged since then. All Baynes spinning wheels featured the quick-change flyer which Ian had patented before starting to make wheels. It has a hole in the whorl for the yarn to pass through, seen very clearly in the closeup at left. This is a Colonial Mark 1 with its wavy-edged mother-of-all.

The Simplex (A-frame) wheel first appeared in advertisements in August 1979, and the unusual two-legged Karena in June 1980. Possibly 500 of each were made, before their production stopped five or six years later. The pictures at right are from a Baynes leaflet.

In all, Ian estimated his firm may have made about 5000 wheels. They stopped making the Colonial by 1988, when there were fewer spinners buying new wheels. In 1993 the wheel-making part of the business was sold to Murray Bebbington, and production of the Colonial continued with many being exported to the USA.

This information was compiled by Lyndsay Fenwick with the help of Ian Baynes.

Note: the company ceased production in 2015. The original information that would have come with a later Baynes wheel can be downloaded here.